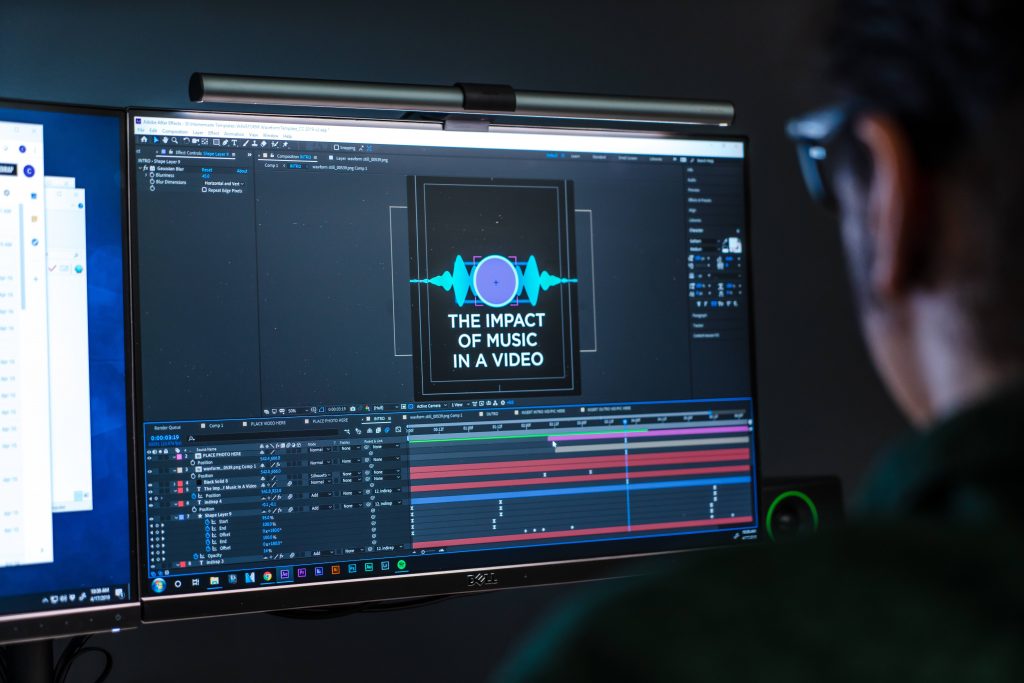 Whether we realize it or not, our work environments are filled with jargon that can sound like complete nonsense to anyone outside of our industry. It can even sound like an entirely different language. Video production is no exception. One of the key components of INDIRAP’s efficient process is communication, so we’re going to try to make that even smoother by presenting you with our post-production glossary.

Here’s your guide to understanding the terminology and jargon of post-production.

Filming or photographing done using drones to capture a wider angle or different perspective than is possible when shooting from the ground.

Here’s an example of some aerial footage we shot:

Aspect ratio is the ratio between the height and the width of the video. For a really great explanation of common aspect ratios and when to use certain ones, check out this article.

Any materials needed to create the video. Assets can include the actual footage, logos, audio, animations, etc.

Audio mastering is balancing all elements of the audio that were recorded during production. This ensures consistency in the sound between various clips as well as uniformity when the audio is played back on different devices in the final video. Here’s why good audio matters.

B-roll footage provides supplemental imagery and can be used over “talking head” interviews to make the video more visually appealing.

Color grading is the process of altering and enhancing an image or video for creative effect. INDIRAP shoots in a “flat” color profile to allow us a wider range of options when color grading. Color grading is important in setting the mood of a video and correcting any unintended mistakes such as overexposure. Here’s why color grading is key for high quality video content.

An editing transition that is a simultaneous fade-in of one audio or video source as another one fades in so that they temporarily overlap and make for a smooth transition.

Exporting is the act of saving an edited video into a file format that can be easily uploaded to a platform like YouTube or played off of a computer or phone.

The final cut of a video is the version that is intended to be posted or distributed.

Visual elements added on top of video footage that can include text on screen, animation, graphs, renderings and more. These are created digitally on the computer. Want to know how motion graphics can enhance video? Check this out.

A green screen is used to easily replace the background behind a person or object being filmed.

A lower third is a graphic overlay placed onto the video during post production that will typically include the name of a person, possibly their title and the organization they work with. A lower third can also be an address, a caption, or any other additional information that is displayed visually on screen.

Any good post-production glossary needs an explanation of “post-production.” This is the final state of the production process before delivery that includes the video editing, sound mastering, color grading and other visual effects.

Unedited footage directly from the camera.

The first cut that is created by an editor Think of a rough cut like a draft of the project that is meant to be tweaked, refined or changed altogether. The purpose of this cut is to see all of the different shots in order of how they will appear and to get a general idea of what the video will look like. Rough cuts have not been edited for color or sound.

A clip of audio that is selected from a full audio recording, it is usually a highlight from the full recording meant to capture attention and used to promote the full piece. At INDIRAP, we use soundbites in our social media content to engage, educate and entertain.

Any sound elements other than music or speaking that are added to a video for dramatic effect. Sound effects can include things like

A storyboard is actually part of the pre-production process, but we’re still going to include it in this post-production glossary. Storyboards are a sequence of drawings or directions that map out the course of a video. Editors use this in post-production to ensure the final edit is as close to the intended product as possible.

Audio narration that is coming from off-camera.

We hope you found this post-production glossary to be helpful in understanding the terminology in our industry. We’re always looking to provide value and education to our clients and audiences, so let us know what else you’d like us to explain at our Instagram page @indiraphd.

All electric everything in NYC with @mercedesbenz

We love these guys!! Some of our favorite takes fr

Just a lil' taste 😛 Goes well with 4 shots of

Check out some of our favorite takes from a recent